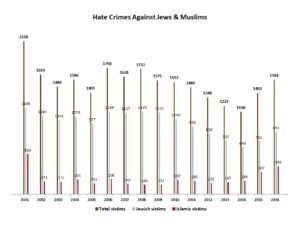 This commentary focuses on hate crimes motivated by religion and argues that American Jews and Muslims as the primary targets of religious hatred must cooperate to fight the hate menace. The commentary also argues that the provocateurs of religious hatred and their corporate sponsors should be identified, exposed, and held responsible under both civil and criminal laws.

Each year, the Uniform Crime Reporting (UCR) program operated under the Federal Bureau of Investigation (FBI) collects data across the United States involving various offenses, including hate crimes. In 2016, for example, a total of 6, 121 hate crimes were reported, involving more than 7,500 victims. Victims include individuals and businesses.

Hate crimes are ordinary crimes, including murder, rape, assault, and property damage, motivated by the offenders’ biases. Bias-motivation rather than the type of offense determines the genealogy of hate crimes. Various biases motivate hate crimes, including those of race/ethnicity/ancestry, religion, sexual orientation, gender, and disability.

A common misperception exists among some social and political circles that American Jews and Muslims are at odds with each other. Surely, the Israeli-Palestinian conflict divides Jews and Muslims. Yet in the United States, if hate statistics are any indication, Jews and Muslims as the foremost targets of religiously-motivated hatred occupy the same boat. Recognizing their common victimhood, Jewish and Muslim organizations need to pool their resources to fight religious hatred against all groups.

Unfortunately, some prominent provocateurs of Islamophobia are Jews, such as David Horowitz, Pamela Geller, David Yerushalmi, and Shalom Lewis. Some Jewish provocateurs paint Islam as an inherently violent religion; some portray American Muslims as a threat to national security; some lead campaigns for drawing the Prophet Muhammad’s cartoons; and some advocate murdering the families of “terrorists.” Such incitements poison the minds of ordinary Americans who lack the first-hand contact with Muslims.

It is unclear why Jewish provocateurs breed hatred against Muslims. Presumably, they do know that American Jews are and have been the prime victims of religiously-motivated hatred. Maybe, they foolishly believe that by propagandizing the perils of Islam they can divert the hatred against Jews toward Muslims. Maybe, they don’t care about hate crimes against Jews as long as Muslims are also despised. Maybe, they are unaware of the spill-over effect of hatred.

The UCR statistics demonstrate that when hatred against any religious group is incited, almost all religious groups, including atheists, experience more hate crimes. The spill-over effect is particularly pernicious with respect to historically-targeted religious minorities, such as Mormons and Jews. Even American Catholics, the third most hated religious group, suffer additional hate crimes when Jews and Muslims are targeted.

In a previous commentary, I distinguished between provocateurs and perpetrators of religiously-motivated hatred. A provocateur produces hatred against an identified religious group by speech, oral or written, but rarely commits a hate crime. By contrast, perpetrators commit hate crimes, such as murder, rape, physical assault, or property damage, motivated by bias against the religious identity of victims.

Laws are in place to punish the perpetrators of hate crimes. However, the provocateurs of religious hatred seek refuge under the First Amendment.

I maintain that the provocateurs of hatred are much more dangerous than the perpetrators of hate crimes. The provocateurs furnish intellectual and emotional resources to cultivate and express hatred. By maligning Islam, for example, the provocateurs lay the foundation for violence. Religious hatred, if unleashed against any religious group, observes no denominational boundaries. Unwittingly, the provocateurs generate hatred not only against Muslims but also against Jews, Catholics, Mormons, Sikhs, and Hindus.

A universal consensus is building that free speech is the heart of a thriving democracy. Free speech is indispensable for transparency, creativity, and accountability. Men and women of enormous intellect and integrity have been exiled, tortured, and murdered for saying innocuous things such as “that the earth moves or that it is not flat.” The depressing history of intellectual and political oppression cautions us not to dilute free speech protections.

Sean Hannity, Frank Gaffney, David Horowitz, David Yerushalmi, Shalom Lewis, Robert Spencer, Ann Coulter, Pamela Geller, Bill Maher, to name a few, and the corporate media that sponsor them to express religious hatred can be held liable under state and federal laws. The victims of religious hatred should speak to their lawyers to explore the possibility of whether any of these provocateurs and their corporate sponsors can be held responsible for the religiously-motivated provocations that nurture criminal violence.

The legal system cannot sit idly by to passively ponder over the statistics of hate crimes that the UCR generates each year. The perpetrators of hate crimes, if apprehended, are lawfully prosecuted. But the provocateurs that disgorge hatred in their TV shows, speeches, or writings take cover under the First Amendment. The lawyers may begin to experiment with various available legal doctrines, including aiding and abetting, accomplice liability, vicarious liability, contributory liability, principal liability, and corporate negligence to reach the provocateurs of hatred.

***The hate crimes victims’ chart is prepared using the data available at https://ucr.fbi.gov/